The Lichfield Mercury 4 Feb 1921 reported the unveiling, by Mrs J Bagby, of a memorial stone cross in memory of the 67 men from the parish who gave their lives in the Great War. This is the cenotaph on the south side of Brownhills parish church of St James. The article lists the 67 and the first is Joseph Adams. 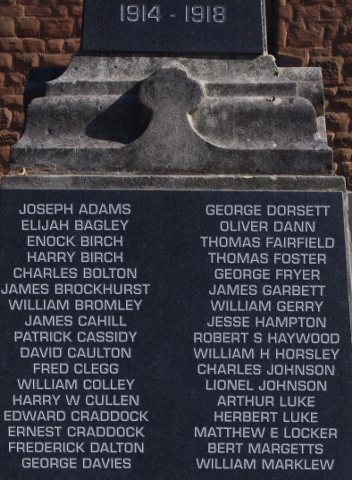 Conveniently, the article provides a summary his service. It reads:

Private Joseph Adams, of the South Staffords, son of Mr and Mrs Joseph Adams of High Street, Brownhills, has been killed while in action in France by the bursting of a shell, a piece of which struck him in the neck. Enlisting in April 1915 he was sent out to France in September 1916, and on August Bank Holiday rejoined after a short furlough. He was 19 years of age and had taken part in several big engagements. Mrs Adams has had three brothers and a cousin serving, the latter having resided with Mrs Adams’ mother, Mrs Pember, whose son, C Pember, of the Coldstream Guards, died of wounds on December 17 1916. Bert Pember, of the Worcesters, was recently discharged, and Albert Pember, of the South Staffords, has been wounded twice, on the last occasion (in February) being taken prisoner, and he is now in Germany. Harold, the cousin, was also in the South Staffords, and was wounded as a result of which he has lost his left arm.

As far as I can tell Joseph served in the South Staffordshire Regiment’s 7th (Service) Battalion. In The war diary for the day he was killed, 23 Aug 1917, reports casualties were 7 other ranks, one (though not named) being Pte Adams. According to the South staffordshire Regiment’s website, the battalion saw action at Gallipoli, then Egypt (including defence of the Suez Canal), and ordered to reinforce the 3rd Army on the Somme 17 June 1916.

“They departed from Alexandria on with the last units leaving on the 3rd of July. By the 27th July, they were in the front line on the Somme and took part in The capture of the Wundt-Werk, The Battle of Flers-Courcelette and The Battle of Thiepval. In 1917 they were in action in Operations on the Ancre then moved north to Flanders for The Battle of Messines, The Battle of the Langemarck …”

This is the work of the genealogist, the bare facts. As a family historian I would like to add to add some more human interest, but I have been able to find little of that sort. The Register of Soldiers Effects says that Joseph had £4 17s 1d. This and £10 10s was to be paid to Comfort, the sole legatee. The real human story, of course, or at least one of them, is that this is not just about one man. What we see from the news report is that Mrs Adams had three brothers and a cousin whose lives were in danger, and that her sister Mrs Pember had one son killed and another held prisoner by the enemy. I find it hard to imagine how that must feel, what it was like for that family with five of their boys in the mud and terror. They probably had much less idea of just how bad things were than we do today, because news in wartime was suppressed and there was a vigorous propaganda machine, but the waiting, the uncertainty, the knock on the door that might preface an unwelcome telegram?

Footnote: In the 1911 census of England and Wales Joseph is recorded at High Street, Brownhills, age 13, at school, with his parents Joseph (miner stallman hewer) and Comfort Adams, three siblings and a cousin in service. Pember families lived either side, one including Charles (Guards) and Albert, named above. Joseph Adams and Comfort Pember were married at Ogley Hay on 1 Nov 1897.

This blog began with the notion that accident permeates life and this leads to the somewhat haphazard progress in exploring family history. Well, just the other day, I made a surprise discovery.

I had reason to visit the cenotaph, which stands outside the parish church of St James, Ogley Hay. On a whim I took a detour through the churchyard and found the gate to the old graveyard was open. Previously, when I had visited to try to find memorials to my ancestors it was secured by a hefty padlock. END_OF_DOCUMENT_TOKEN_TO_BE_REPLACED